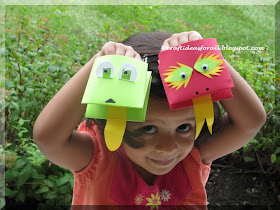 My daughter's recently developed interest in Puppets, motivated me to create these finger puppets - Darry the Dragon and Frumpy the Frog. This is something easy to make, inexpensive and a sure hit with kids. I have tried and tested it with my 2.5 year old daughter. She was so excited throughout the process of making it. Once completed she had them in her hand and was telling stories the whole day. The fact that they open their mouth when she moves her fingers was fun for her. 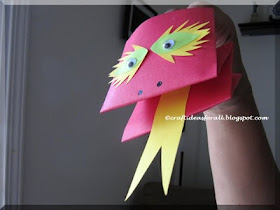 1. Take the A4 sheet Papercolor you want for Dragon. I have used Red.
2. Fold it lengthwise as shown in the illustration to divide in 3 equal parts.
3. Fold one edge over other.
4. Seal the edge with double sided tape.
5. Now fold the resulting shape in half and then again is half as shown. You will get
four equal sizes.
6. Fold the paper in accordion fold as shown.
7. Decorate the resulting puppet with the paper cut out and wiggle eyes as shown in
the above illustration. You can glue the cut outs. Use black marker to make nose.
8. Your Finger puppet dragon is ready. 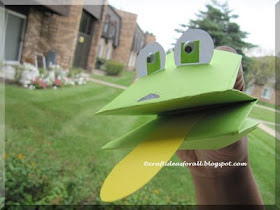 Follow the same steps as mentioned above 1 to 6 with green colored A4 sheet paper. You can use any other color also if you like.

The paper cut out for Frog's eyes follow the below illustration.

It is easy to make and lots of fun for kids. It is highly recommended to give it a try. Within minutes you can create something which will give hours of fun.

Tips:
-Click on the image to enlarge.
-For younger kids, parents can make them. Instead of wiggle or google eyes use paper cut outs black and white.
-You can make your own designs. Let the bigger kids use their imagination to decorate the finger puppet.
creativenimi at 7:05 AM
Share

We will love to have your comments/feedback!